Due to its system-wide mandate, the JIU has played a key role in enhancing and supporting the development of RBM within the UN system and its entities.

Results-based management (RBM) is a broad management strategy focused on achieving results and aimed at changing the way agencies operate, with improving performance as central orientation. As a management tool, it should enhance responsibility, organizational learning and accountability in the implementation of programmes and budgets. The focus on results has been at the centre of different reform agendas within the UN, responding to global agendas such as the Paris Declaration on Aid Effectiveness (2005), or the more recent Busan Global Partnership for Effective Development Cooperation (2011). Its introduction has been largely driven by demand from contributor countries for the United Nations to improve its efficiency, effectiveness and accountability.

Shortly after the adoption of the Millennium Development Goals (MDGs), which called for a paradigm shift in the way the system operated, JIU issued a report on “The results approach in the UN: Implementing the UN Millennium Declaration” (JIU/REP/2002/2). This report proposed among others to streamline country-level reporting to facilitate the monitoring of progress of the MDGs by Member States.

To further support the new drive for RBM triggered by the adoption of the Millennium Declaration, the Unit developed a benchmarking framework in 2004 for RBM implementation and assessment in a series of reports on managing for results in the UN system. Each of these reports covered the main pillars identified for the effective implementation of RBM. For each pillar, benchmarks were set up to support the development of a harmonized and high impact RBM system, with due regard to organizational specificities. These reports were complemented by a summary report which provided an overview of the benchmarks. 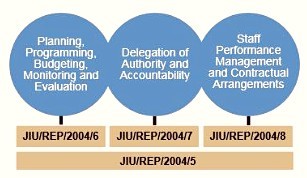 An analysis of the 2008 Secretary-General’s report (A/62/701) shows that many of its findings and recommendations are based on the guidance established by JIU in its 2004 and 2006 reports. Furthermore, the benchmarking framework was used by OIOS to conduct its own evaluation of RBM in the UN Secretariat (A/63/268) in 2008. In 2012, the framework was also applied for an RBM study commissioned by UN-DESA in the context of the 2012 Quadrennial Comprehensive Policy Review (QCPR) of the General Assembly. JIU continues to assess the mainstreaming of RBM principles, notably through its management and administration reviews of single organizations. Most of the MARs conducted between 2004 and 2016 contain a section dedicated to RBM. The level of acceptance and implementation of RBM-specific recommendations is high.

Following a call by the General Assembly through the QCPR (A/RES/67/226), the JIU included in its programme of work for 2015 a review of the status of RBM in the UN and system-wide results reporting across the UN system. Ten years after the publication of its benchmarking framework, the JIU decided to take this opportunity to revisit its benchmarks, reflecting on the experiences of UN entities, the important changes in the environment, but also on the evolution of the RBM concept over time. 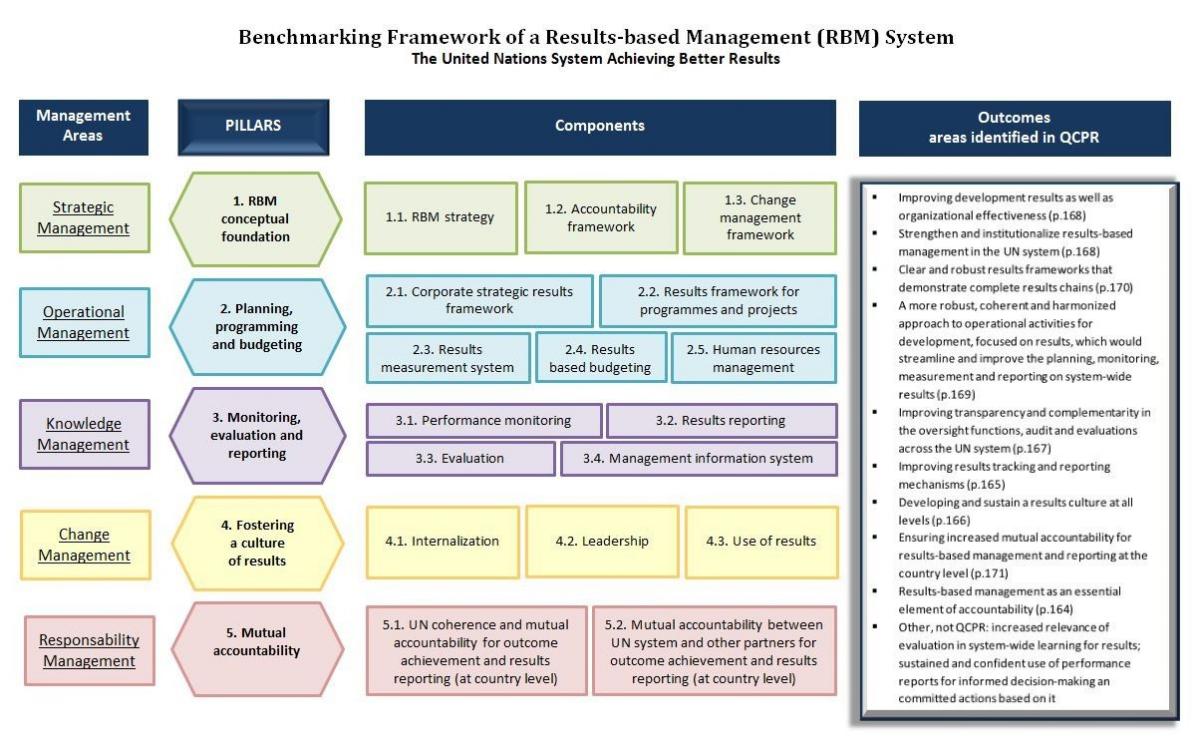